Live Life with Our Eyes Open 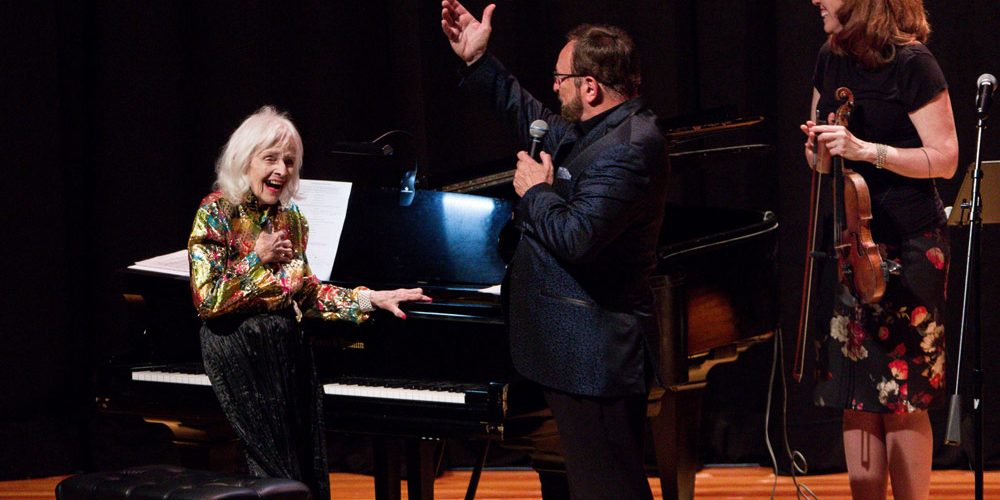 I got the news that someone whom I had memorably met, but only briefly got to know, had passed away. It made me think about how I came to cross paths with this person who left a lasting mark on my heart. It also called to mind the reason why we need to “Live life with our eyes open,” capturing moments along the way. As a storyteller, I give you this Messmer-izing Moment called, “Dorothy”

Once upon a time, I went to the Northbrook, IL YMCA. It was an afternoon last Spring when I was there out of curiosity and respect for the guest who was to play the piano. My interest was piqued after seeing a couple stories on this particular pianist, whose name, by the way was Dorothy Olson Pauletti. You probably heard about her? She was pretty popular after being on TV. 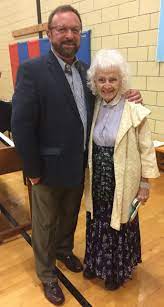 Wayne meeting Dorothy Olson Pauletti at the Northbrook YMCA in 2019.

To my delight, Dorothy arrived with her entourage led by her daughter and son. The pride they had in their mother was evident in their smiles and the looks of adoration when she sat down at the piano bench to immediately emerge into a rousing rendition of, “Enjoy Yourself, It’s Later Than You Think,” an evergreen from 1949 that may have been the most appropriate musical choice from the 102-year old pianist. The lyrics, could not be more fitting:

I sat and smiled with delight as Dorothy transformed the gym at the “Y” into a cocktail lounge, if you just closed your eyes and were willing to take a sentimental journey to a simpler time when the only choice when ordering a martini was whether it would vodka or gin. That was the period when Dorothy worked the piano at a pretty swanky spot at the Palmer House.

As the songs poured out one after the other, I watched and listened as Dorothy played and sang her way through the requests that were shouted out by the 40 or so seniors who had assembled for a free program of songs mostly from their youth. It was touching that music was still so very much alive in this dear lady, who was beaming from ear to ear.

Someone requested Irving Berlin’s masterful, “God Bless America” at which point, those 40 heads whipped in my direction and someone said, “sing with her!” with no holding back any emotion. Having sung that song countless times, I thought it would be fun to sing with my new friend. I was right! After a brief, “How do you do,” we launched into “God Bless America” in the key of F with gusto. The audience loved it and a young octogenarian said, “Wayne, sing something romantic.” Not one to let a musical opportunity go to waste, I leaned over to Dorothy and asked for a crooner tune called “I Wish You Love” to which she replied, “What key, Honey?” “E flat,” I said with a grin, and we were off together in song. I was smitten.

When the program was over, I inquired whether Dorothy might be interested in appearing on stage at a concert that I was doing in September. After a series of email communications, the plans were in place for a “Special Guest” appearance by Dorothy Olson Pauletti on September 14, 2019 at the Orlin Trapp Auditorium “Wayne Messmer & Friends” Concert that opened the 2019-20 Lake County Community Concert Association (LCCCA) www.lakecountyconcerts.org series. 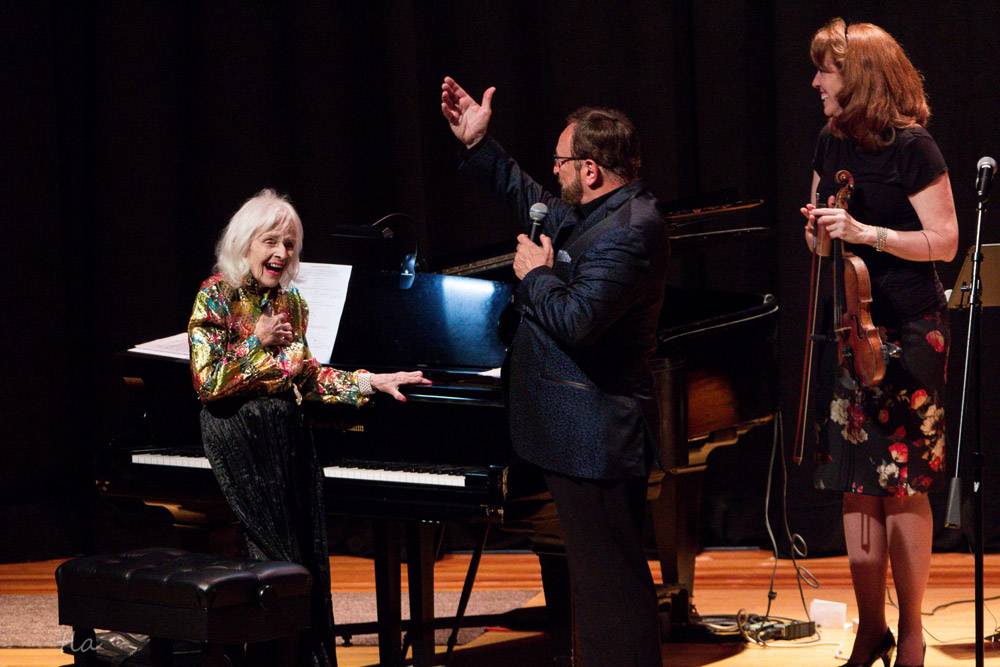 The program featured a Big Band, world-class jazz violinist Suzanne Lansford, guitarist Nathaniel Niederkorn… and my “Very Special Guest,” Dorothy Olson Pauletti. When I introduced her, every eye the theatre felt the sparkle of life coming from this dear, and now delicate image who appeared from the wings to accept a loving applause. The audience was rewarded with Dorothy’s smile. From that moment on, she owned the stage.

With Suzanne Lansford improvising on the violin, Dorothy was off and running to the tune, “Always,” a sweet and sentimental little number by the very same Irving Berlin, who composed this as a wedding gift to his bride Ellin McKay. Lyrics that speak to most of us during our present set of challenges:

We then sang and played together for another tune and the audience had fallen in love with Dorothy. She accepted her applause with a sense of joy when the call when “Ladies and Gentlemen, please welcome Dorothy Olson Pauletti” was sounded out as her call to the stage. What a gift it was to have the captured such a beautiful moment for all of us to share. This dear lady, who sparkled in her appearance, gave us a message of hope and of never letting go of our passion for who you are and what you do. Dorothy played the piano that night, but she did so much more. She gave us vision that brought a smile that is not going to fade.

Wayne Messmer is a master storyteller who engages audiences with a balanced mixture of wit, humor, music, experience and inspiration. Drawing from a storied career as a certified speaking professional, singer, broadcaster, author, actor, and businessman, Messmer delivers a timeless message of resilience, perseverance, adaptability and hope for all audience types. You will be changed by Wayne when join his journey on stage, and in blogs, books and music.

From the Blog…
Go to Top
X